Maths for a Very Maths-y Boy

This year I am taking part in the Virtual Curriculum Fair 2017, which is hosted by Susan @ Homeschooling Hearts and Minds. This is the third week, and the theme is Discovering Patterns: Mathematics, Logic, and some Science. 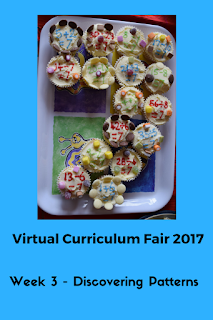 When he was younger, and until fairly recently, he had quite severe problems with his speech. This in turn meant he was behind with his English in general, though his reading is now very good and his other language skills are catching up. Although he now speaks clearly, he still doesn't sound completely natural - but he loves being able to communicate his thoughts effectively now, even struggling to stop talking at times.

Perhaps because his delay in this area has been so marked, his ability with mathematics has always been particularly striking. When he was little, this showed in how he ordered his toys according to colour, or followed Lego instructions for far more difficult models that his siblings managed at similar ages. As he got older, his confidence with numbers became more obvious.


Initially, I taught our 7 year old in the same way as his two older brothers, starting with Singapore maths at kindergarten level when he was about 4, then continuing to work through the grade levels at about 1 year ahead of where he technically should be. In addition, he used an online programme called Maths Whizz, which is linked to the English national curriculum, and which our children have all enjoyed as a supplement to their ordinary maths workbooks.

He loved his maths, but clearly wasn't finding it at all challenging. I have always been slightly averse to pushing the children on huge amounts past the expected level for their age in maths just for the sake of it, but my husband persuaded me that I should let him move on more quickly if he wanted to. I asked him if he'd like to do two maths lessons a day, and he was thrilled - so it seemed wrong not to do so! He is now working through Singapore maths 4A, and still managing it largely effortlessly. We're continuing to do two lessons a day - though I plan to slow down at some point, probably this year (though I'll see how he's doing).

In addition, after quite a bit of research for additional maths that would stretch him, this year I invested in Beast Academy workbooks for him. I bought Grade 3 books, and these have been about right for him so far. There is a student guide and a student workbook. The guide teaches the maths in cartoon format, and the workbook gives lots of exercises which test the skills taught in the guide. I like them because they get him thinking in new ways, and test his maths skills thoroughly. He has had to really think about some of the questions, and even has to do corrections from time to time - which is a good thing to learn to do!


We also use an app called Squeebles for times table practice. I like this app because you can take as long as you need to fill in the answer (which helps you to remember for next time), but it still rewards you for speed. It works well for us.

So maths for our able 7 year old means that each day he does: 2 lessons of Singapore maths, Beast Academy, Maths Whizz, Mental Maths, and sometimes some Squeebles for times tables practice. Most of this is because he likes it!

What I have learned most from teaching my 7 year old is that I need to adjust and adapt all my successful resources for both a child who struggles more, and for a child who excels. It is interesting to have both these problems in one child - and a little expensive at times! What a joy, though, to see someone grow in a subject, and grow in love for what they are learning.

Please visit my fellow homeschool bloggers who are talking about Discovering Patterns: Math and the Mathematical Sciences this week:

Finding Our Math Equilibrium: Our Plan for 11th, 7th, 5th, and 2nd Grades + Free Printables! by Susan @ Homeschooling Hearts & Minds
Math Resources and Programs for All Ages by Amanda H @ Hopkins Homeschool
Math (doesn't) Stink! by Jennifer King @A Peace of Mind
When Math is NOT Your Thing by Michele@Family, Faith and Fridays
Math U See and All the Supplements by Laura H @ Four Little Penguins
Discovering Patterns in Our World: STEM Studies by Laura @ Day by Day in Our World
Junior High Math by Jennifer @ A Glimpse of Our Life
Science & Math for Struggling Learners by Yvie @ Gypsy Road
Maths: a subject in progress by Sarah @ Delivering Grace
Taking Mathematics out of the Textbook by Dana Hanley @ Roscommon Acre
Maths for a Very Maths-y Boy by Lizzy @ Peaches At Home
Practical Math by Annette @ A Net in Time
One of the greatest benefits of homeschooling by Kim @ Good Sweet Love
Math, How I Loathe Thee by Shecki @ Greatly Blessed
Math and Logic in Early Elementary and Preschool {virtual curriculum fair 2017} by Meghan W @ Quiet In The Chaos
Low Stress High School Science and Math by Christy @ Unexpected Homeschool
Are these toys or manipulatives? This is math? by HillaryM @ Walking Fruitfully
When You Don't Have a Math Plan by Brittney @ Mom's Heart
Clear Horizons by Lori H @ At Home: where life happens
A Few Thoughts on Teacher Math by Kristen @ Sunrise to Sunset

An InLinkz Link-up
Posted by Lizzy Peach at 13:55